30 members of the Catholic Union attended the annual Summer Gathering held this year at the Christian Heritage Centre at Stonyhurst, Lancashire (our first return visit there since 1991).  Members enjoyed a tour of the Stonyhurst Collection of Treasures including relics of St Thomas More (our patron) and those of a modern martyr St Oscar Romero, not to mention a Shakespeare First Folio.  We also had an illustrated talk from former President Lord Alton about the Christian Heritage Centre (a former corn mill and now a well appointed retreat and conference centre) and a talk from our current President Sir Edward Leigh which touched on Brexit, Relationships and Sex Education, Divorce law, Abortion centre “buffer zones” and Catholic schools.  Many of those attending stayed overnight in the Christian Heritage Centre and enjoyed dinner together in a nearby pub.  On the following day, some walked the “Tolkien Trail” while others visited the nearby Marian shrine of Ladyewell at Fernyhalgh.

It was an enjoyable and uplifting weekend spiritually and socially.  In 2020 which is “sesquicentennial” of the Catholic Union (150th anniversary), we will likely be returning to London for our Summer Gathering (venue to be confirmed). 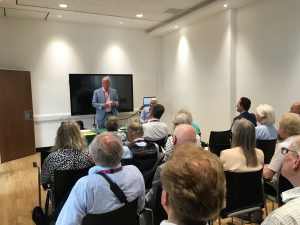