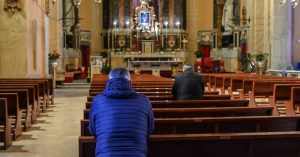 The Catholic Union has called on the Government to rule out the use of Covid passports for churches and other places of worship.

The Government has said it intends to make certification mandatory for access to certain “crowded” places later this year, but details of the proposals are yet to be confirmed.

Faiths Minister, Lord Greenhalgh, said on Twitter that the Government does not intend to make double vaccination a condition of entry to places of worship.

The comments followed a statement by the Vaccines Minister, Nadhim Zahawi, in Parliament yesterday (22 July) in which he failed to mention places of worship among the list of places that would be exempt from the policy.

The Catholic Union welcomed the comments from Lord Greenhalgh, but has urged the Government to provide a cast iron guarantee that at no point will proof of vaccination to be needed to enter a place of worship.

In a letter to the Vaccines Minister, the Catholic Union said it hoped that “proof of vaccination will neither be mandatory nor advised for places of worship.”