Catholic Union calls on Gove to deliver for faith groups 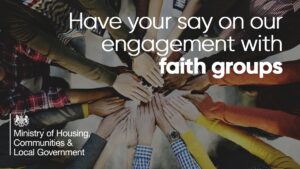 The Catholic Union has warned that work on faith engagement risks being “side-lined” under a new department headed up by Michael Gove.

As part of Boris Johnson’s recent reshuffle, Mr Gove was appointed Secretary of State for Levelling Up, Housing and Communities – the department previously known as the Ministry of Housing, Communities and Local Government.

The department also has responsibility for faith engagement. The previous Secretary of State, Robert Jenrick, chaired the Taskforce on Places of Worship during the pandemic, which helped facilitate the safe opening of churches and other places of worship.

The Catholic Union is concerned that work on faith engagement could get overlooked as the department is now also responsible for the Prime Minister’s levelling up agenda and work to promote the Union.

In a letter to Michael Gove, the Catholic Union has called on the new Secretary of State to set out his plans to make sure that the voices of faith groups are heard in Government.

Catholic Union Head of Public Affairs, James Somerville-Meikle, comments: “Faith groups have so much to offer as we recover from the pandemic. But there is a lot of work to do to make sure that the potential of faith groups is realised by policy makers – including improving religious literacy across government and increasing engagement work with faith groups.

“Our concern is that efforts to improve the Government’s relations with faith groups risk being diminished by the growing number of responsibilities at the department. With Michael Gove’s new brief including the levelling up agenda, and efforts to promote the Union, it’s easy to see how faith engagement work could end up at the bottom of the in-tray.

“If the Government is serious about plans to level up the country then it needs to work with faith groups to help bring about change in our communities. There is an opportunity for a beefed-up communities department to lead to better relations with faith groups, but we need to see a plan from the new Secretary of State to make this happen. Publishing the report from the Independent Faith Engagement Review would be a good place to start.”

A fantastic debate. Thank you to everyone who helped oppose the Bill. Concerns about assisted dying on the parliamentary record & clear steer from Govt not to support the Bill. Well done @DyingWellAppg @RightToLifeUK @CNKAlliance & many many others.

The Assisted Dying Bill has completed Second Reading and, as is convention, without any vote. It will move into Committee at a future, as yet unspecified, date. Eight hours of debate, 130+ speakers. Many for, many against. Much to chew over. Respectful & sincere, as it should be.

It is the final day of the #novenaforlife #assisteddyingbill Second reading is taking place right now - we continue to ask Pope St. John Paul II to intercede for us! @catholicEW

Lord Brennan QC writes for http://politics.co.uk stating that "the dangers of such a new law are several and very serious". https://www.politics.co.uk/comment/2021/10/22/assisted-dying-is-not-just-an-issue-of-autonomy/

"So what is the call to us who live at a time when visceral divisions and polemics literally constitute a danger to human life?"