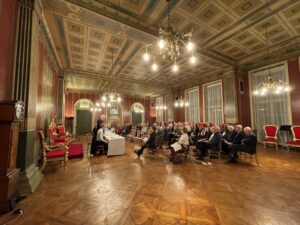 The 2021 AGM on 28 October was a successful and enjoyable occasion held in the beautiful surroundings of the Throne Room at Archbishop’s House, Westminster. This was a privilege kindly granted by Cardinal Vincent Nichols to mark the Catholic Union’s 150th anniversary. The AGM heard addresses from Sir Edward Leigh MP (President), David O’Mahony (Chairman), Richard Collyer-Hamlin (Vice-Chairman), Nigel Parker (Director) and former MP Robert Flello who was elected to succeed David O’Mahony as Chairman. Cardinal Vincent addressed members during the reception which followed the meeting and thanked the Catholic Union and its members for their work.

To see the photos from the AGM, click here.