Christian groups call on Chancellor to deliver for families 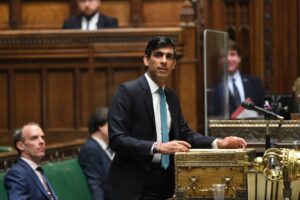 Three Christian organisations have called on the Chancellor to make the tax system fairer for families ahead of the Budget and Spending Review later this month.

The Catholic Union of Great Britain; the Centre for Enterprise, Markets and Ethics; and the Benedict XVI Centre for Religion and Society, St Mary’s University, Twickenham have set out a plan to support families as we recover from Covid.

In their joint submission to the Treasury, the three organisations have called on Rishi Sunak to move towards fully transferable tax allowances and bands so that all families with the same income pay the same amount of tax regardless of whether they are single-earner or dual-earner households.

At present, only 10 per cent of the current £12,570 tax free personal allowance can be transferred between couples. The three organisations have called for this to be increased at the next Budget, with a view to all tax allowances becoming fully transferable replicating the effect of systems that exist in countries such as France and Germany.

In their submission to the Treasury, they highlight that the current tax system discriminates against single-earner families who forsake a wage to look after their children or elderly parents.

The three organisations claim that moving towards fully transferable tax allowances is not only equitable but could save taxpayers at least part of the annual cost of family breakdown which is estimated at over £50 billion.

The Budget and the Spending Review are due to be announced on Wednesday 27 October.

Professor Philip Booth, Professor of Finance, Public Policy and Ethics at St Mary’s University, Twickenham, comments: “The UK is unusual in the Western world in discriminating in such a marked way against single-earner couples or couples whose earnings are not equal. We probably tax families more severely than any other comparable country. It would not only be fairer to move to a tax system where tax rates were based on family income, it would remove the penalties on family formation that exist in our current tax and benefit systems. Furthermore, it would remove the penalties faced by couples where one member takes on caring responsibilities.”

Andrei Rogobete, Associate Director of the Centre for Enterprise, Markets and Ethics, comments: “Transferable tax allowances would provide a crucial lifeline to low-income and single-earner families that have been already struggling throughout the pandemic. It is an important step in making our tax system fairer and more purposeful in recognising the complex needs of families.”

Nigel Parker, Director of the Catholic Union, comments: “The health and economic crisis caused by Covid has put a strain on many family budgets and relationships. As we recover from the pandemic, we need to see a plan from the Government for how they intend to support families – making the tax system fairer would be a good place to start. This is needed more than ever with the £20 uplift in support payments coming to an end and cost of living increasing. Many families will be feeling the squeeze this winter. Helping families keep more of the money they earn will not solve all of their worries, but it would be a very welcome first step.”

A fantastic debate. Thank you to everyone who helped oppose the Bill. Concerns about assisted dying on the parliamentary record & clear steer from Govt not to support the Bill. Well done @DyingWellAppg @RightToLifeUK @CNKAlliance & many many others.

The Assisted Dying Bill has completed Second Reading and, as is convention, without any vote. It will move into Committee at a future, as yet unspecified, date. Eight hours of debate, 130+ speakers. Many for, many against. Much to chew over. Respectful & sincere, as it should be.

It is the final day of the #novenaforlife #assisteddyingbill Second reading is taking place right now - we continue to ask Pope St. John Paul II to intercede for us! @catholicEW

Lord Brennan QC writes for http://politics.co.uk stating that "the dangers of such a new law are several and very serious". https://www.politics.co.uk/comment/2021/10/22/assisted-dying-is-not-just-an-issue-of-autonomy/

"So what is the call to us who live at a time when visceral divisions and polemics literally constitute a danger to human life?"