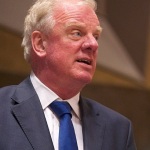 The Right Honourable Sir Edward Leigh MP is President of the Catholic Union.

Edward Leigh was born in London in 1950. He was educated at St Philips School, London, the Oratory School, Berkshire, and the Lycée Français in London. He studied History at Durham University, where he was president of the Durham Union Society.

He is the younger son of Sir Neville Leigh KCVO, former clerk to the Privy Council. He is married, with three daughters and three sons.

Edward is a qualified barrister and a member of the Inner Temple, and practised in arbitration and criminal law for Goldsmiths Chambers. He is also a Fellow of the Chartered Institute of Arbitrators.

Edward was a member of the Richmond Borough Council and, from 1974 until 1981, the Greater London Council.

Mr. Leigh worked in the private office of Mrs. Thatcher from 1976–77 as private secretary in charge of her correspondence as Leader of the Opposition.

Edward was Chairman of the National Council for Civil Defence and was Director of the Coalition for Peace Through Security, until early 1985.

Edward Leigh is a former member of the Social Security Select Committee and was Joint Vice-Chairman of the Conservative Parliamentary Foreign Affairs Committee. Between 2001 and 2010 he was Chairman of the influential Public Accounts Committee — a role he relinquished after serving the maximum term. He has served as an Independent Financial Advisor to the Treasury and serves on the Treasury’s Financial Reporting & Advisory Board.