The Catholic Union’s annual Craigmyle Lecture was delivered this year by the Labour peer and founder of Blue Labour, Lord Glasman. 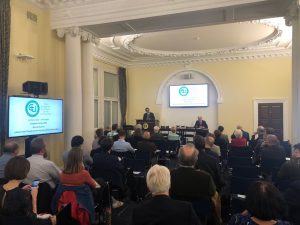 Lord Glasman said it was “extremely generous” for someone who is not Catholic to be invited to give a talk on Catholic social teaching. But he stressed the universal appeal of Catholic social thought, and reminded his audience of the role of the Church in the development of the Labour movement in Britain. “Catholic social thought is in exile in this country and it is time for it to come home”, he said.

The talk also touched on Brexit and Lord Glasman said that the “abandonment of Catholic values which had been at the heart of the EU” had helped to create a disconnect between people and politics in Europe. He described this moment as a time of change which was “disturbing and frightening to many people.”

Catholic Union Head of Public Affairs, James Somerville-Meikle commented: “This was a fantastic talk from someone who knows the Labour movement inside out in this country. It was a timely reminder of the importance of Catholic Social Teaching to people across the political spectrum, in our past and hopefully in our future. At a time when our politics can often be focused on the short term – this was good to be reminded about what our politicians should be striving to achieve: dignity in work, fair markets, and a more even distribution of wealth. We are extremely grateful to Lord Glasman for his insights into this fascinating time in politics.”

The text of Lord Glasman’s talk is available here: Catholic Social Thought and the Economics of the Common Good