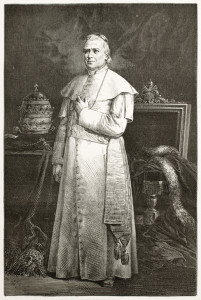 The Catholic Union was founded in 1870 and the earliest meeting was held at Norfolk House, St. James’s Square in London on 10th February 1871 when it was unanimously agreed that a Society of Catholics be founded, under the title of the Catholic Union of Great Britain, to promote Catholic interests. The society was sanctioned by the Hierarchy of England and the Vicars Apostolic in Scotland and approved by Pope Pius IX.

At first the prime intention of the Union was to promote by every legitimate means the restoration of the Papal States to the Pope, but this objective soon fell into the background as the Union developed as the most influential organ of Catholic lay opinion and as an instrument at the service of the Hierarchy.

Instances of action at that time included:

Two early leaders in the Catholic Union were the Marquess of Ripon and the Duke of Norfolk. George Frederick Robinson, Marquess of Ripon was the only political figure of real significance to join the Catholic Church in the late 19th century. Born in Downing Street when his father was Prime Minister he was of great wealth with deeply evangelical leanings to Christian Socialism. He entered Parliament as Liberal member for Huddersfield. In 1874 he became a Catholic and served in Gladstone’s administration and was the only Catholic ever to be Viceroy of India.

In close association with Ripon was the 15th Duke of Norfolk who, from the time of attaining his majority in 1868 until his death in 1917 was the most prominent spokesman for the Catholic body. His most influential period in Catholic affairs was during the eleven years in which Cardinal Vaughan held the See of Westminster.

Politically, Ripon and Norfolk were far apart, especially with the secular optimism and Liberal hope in Ripon’s approach to general questions that was far removed from the Duke’s unimpassioned Conservative principles. They were similar in that they both had a keen idea of what was practicable in a given situation, had a keen sense of duty and were both drawn to works of charity. 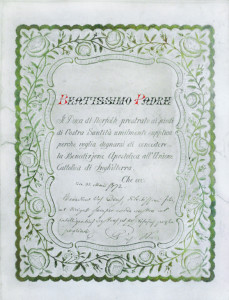 Some Early Facts and Figures

At the time Catholic soldiers were being prevented from keeping their religious observances and when the Union stepped in this was remedied.

In 1874 the Duke of Norfolk received a letter from John Joseph Byrne, President of the newly – formed Catholic Union of Hong Kong seeking affiliation with the Catholic Union of Great Britain. Membership there was only 14, being of English and Irish descent, but he pointed out that there were 3000 Portuguese in the colony and they could jointly promote Catholic interests in China.

In 1874 there was a letter in The Times from the Secretary of the Catholic Union, W.S. Lilly, which stated that there were 600 members and there was not a Catholic family of importance, or any Catholic interest, which does not find a representative among them.

In 1875 there were six societies associated with the Catholic Union, which then had 800 members. On 16th June 1875 the Council sent the congratulations of the Catholic Union for the 29th anniversary of Pius IX’s pontificate to which the Pope replied, giving the Union his Apostolic Blessing.

Also In 1875 the Council attended a reception for Cardinal Manning on his elevation to the Sacred College presenting him with an illuminated address bearing 2500 signatures of the Catholic laity.

In 1880 the Nottingham Catholic Union, set up to protect Catholic interests in their poor schools workhouses and prisons, did likewise.

In 1886 Henry Matthews became Home Secretary, the first Catholic to join the Cabinet since Emancipation.

Next Steps and Social Development

In the first decades of its existence, the Catholic Union reasonably represented the Catholic laity of the nation. Members were suited by experience and education to deal with public affairs, to mould Catholic lay opinion and provided a reservoir of experience from which the Hierarchy could draw. As the Church developed in the late 19th century, new societies sprang up to deal with matters formerly dealt with by the Catholic Union. The action of the Union became more specialised, focusing on legislation which affected Catholic interests through approaches to Government departments.

In 1918 Cardinal Bourne wrote a pastoral letter, The Nation’s Crisis, in which he indicated points of contact between Catholic social principles and the ‘modern social unrest’ which some hoped that the Hierarchy would denounce. Some hoped that the Hierarchy would denounce the Labour Party which in 1918 committed itself to a socialist programme. Stuart Coats, a Conservative Unionist and prominent member of the Catholic Union, was a main agitator against accommodating to labour unrest. He wrote to Cardinal Gasquet in Rome saying that the episcopate was negligent in its attitude to the Labour Party and asked them to condemn it. Bishop Keating of Northampton concluded that if the bishops forbade Catholics to join, it would seem that the Church was siding with the rich against the poor and was “using her spiritual influence for political objects”, an opinion that the Hierarchy and the Holy See accepted.

In 1925, a bill for the removal of the remaining Catholic disabilities was discussed at the Union’s Annual General Meeting, of which we have a report.

In 1926 Cardinal Bourne was concerned with the Roman Catholic Relief Bill which was before Parliament. The most controversial provision of the Bill was the repeal of the exclusion of Catholics from the office of Lord Chancellor. It was against this background that Bourne considered his response to the General Strike. His denunciation of the Strike by stressing obedience to lawful authority was greeted with delight by the Government which helped the passage of the Relief Bill.

World War II and its Aftermath

Before World War II, there was a great deal of interaction with the Hierarchy; matters referred by the Hierarchy for its advice; legal advice to priests and other matters of Catholic interest.

During World War II activities of the Catholic Union all but ceased due to hostilities. The impression after the War was that it was moribund and most of its activities had been taken over by other societies. There was a suggestion that the Union had not conformed to social and economic changes: it was not fully representative and was too conservative and aristocratic to be effective.

In 1946 it was realized that the influence of the Hierarchy would carry more weight with the Government and the country if it was backed by a lay organization representing informed Catholic lay opinion. There was a lacuna in Catholic life; far too much had been left to chance or to the initiative of individuals. Nobody had the specific duty to examine Bills when they were first introduced, to see if Catholic interests were affected. There was no machinery to bring such things to the attention of the Hierarchy or to the attention of Catholic MPs and Peers quickly, onto whom action would devolve. It was decided that there was a need for a Catholic organization which was:

a) truly representative of the Catholic laity as a whole;
b) not recruited from one social stratum;
c) contained members of all political parties;
d) populated by the leading Catholics in every profession and walk of life, especially in political and public life.

Although by 1947 membership had fallen to a mere 200, the Catholic Union had a long history of achievement. It seemed that the Union, with the support of the hierarchy, should broaden its base, extend its membership to assume new and specific duties without abnegating its historical function to deal with unforeseen situations which do not fall within the field of any other Catholic body.

In 1958 Members were invited to join a register from a questionnaire indicating if they would be willing to undertake voluntary service. 162 members, 17% of the Union membership, replied. Areas of expertise offered included:

In 1960 it was decided that other Catholic societies could associate with the Catholic Union provided that they promoted Catholic interests, had received approval of ecclesiastic authorities and could pay an annual fee to the Union. The Chairmen of the associate societies were eligible to serve on the Council of the Union of other committee of the Council.

In 1963 Sir George Rendel drafted a letter to the Prime Minister suggesting that it was a slight to the Holy See that H.M. diplomatic representative to the Holy See is only a Mission to a Legation although missions to Hungary, Romania and Bulgaria had been recently raised to the status of Embassies under Ambassadors. This anomaly was only corrected in 1982 with the Papal visit to Great Britain.

It became increasingly important for members of the Union to keep themselves properly informed and being prepared to act locally as well as supporting any collective action of the Union. The Bishops’ Conference brought into existence, , a Legislative Committee to bring together all the Catholic bodies which had an interest in Parliamentary matters, and ensure effective coverage of all legitimate Catholic concern in the outcome of legislative discussion.

A strong bond was created between the Union and the Guild of Catholic Doctors to form a Joint Ethico-Medical Committee, and also, as a result of a direct Union suggestion, the Bishops set up a Standing Committee for European matters. The Union also participated in the National Pastoral Congress at Liverpool in 1980.

The Parliamentary and Public Affairs Committee began to meet within the precincts of the Houses of Parliament to put the case as it affected Catholic principles. It took a line of non-confrontation, realizing that to promote a comprehensive “Catholic programme” would be counter-productive. Discrete Parliamentary lobbying was undertaken. By 1992 much hard work behind the scenes had been undertaken with such subjects as the “conscience clause” of the Abortion Act that had been largely ignored, homelessness, education, Sunday trading, asylum seekers, the working out of guidelines for the new Human Fertilization and Embryology Authority.  This work continues and is a vital facet of the Union’s activities.

The Catholic Union can fairly claim that no other Catholic body has monitored so carefully and consistently the actions of central Government or followed so thoroughly the details of the legislative programme. The aim is always to seek the “common good” and efforts have been useful and constructive, and on occasion very significant. There is much work still to do and the Catholic Union will meet these challenges in a spirit of service and loyal obedience to the teaching of the Church.