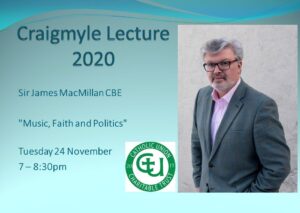 The Catholic Union’s annual Craigmyle Lecture was delivered this year by the Scottish composer Sir James MacMillan CBE with the title “Music, Faith and Politics”.

This year’s lecture on 24 November was delivered via video conference on account of coronavirus restrictions, with Sir James addressing Catholic Union members and supporters from his home in the Ayrshire countryside.

Sir James has composed concertos, operas and symphonies among other works, as well as composing music for the opening of the new Scottish Parliament and the Papal Visit in 2010.

Sir James said that his world revolved around music, but also described himself as a practising Catholic with a keen interest in politics.

Sir James said that the search for the sacred in music had a long history. “Some of the world’s most important composers in the last century or so were profoundly religious men and women”, he said.

Sir James spoke of the number of contemporary composers who also have deep faith. “Far from being a spent force, religion has proved to be a vibrant, animating principle in modern music, and continues to promise much for the future”, he said.

In an increasingly secular world, Sir James said the music had an increasingly important role in bringing the sacred into people’s lives and “offering a window into God’s divine love affair with humanity”.

Sir James said that expressing faith through music was fundamental to freedom of worship, which so many Christians around the world still do not have, and said that expressions of faith in music were needed more than ever.

Catholic Union Director, Nigel Parker, comments: “We are most grateful to Sir James for agreeing to give this lecture and for his uplifting and inspiring words. This was the first time in the history of the Craigmyle Lecture that it has been delivered online. I’m delighted that so many people were able to take part and to have these dark days illuminated by the joys of music and faith”.

A transcript of Sir James’s talk can be found here: CRAIGMYLE-LECTURE-2020