The Prime Minister’s Special Envoy for Freedom of Religion or Belief, Rehman Chishti, has praised the contribution of the Catholic Church to tackling religious persecution. 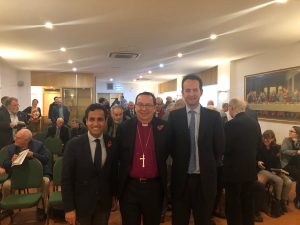 Speaking at a talk hosted by the Catholic Union on 7 November, Mr Chishti said that the Church and Catholic charities like Aid to the Church in Need are helping to provide information on the ground in some of the worst affected places. He also drew on the words of Saint John Henry Newman – lead kindly light – as inspiration for tackling religious persecution.

The event at Mary Moorfields Church in Moorgate began with a talk from the Bishop of Truro, Philip Mounstephen, who led a recent report into Christian persecution.

Bishop Philip said that whilst he had been asked to lead the report by the Archbishop of Canterbury, he saw this as an ecumenical project and praised the contribution of Catholics to the review. He said that persecution of Christians was a “bellwether” for other forms of discrimination, both religious and other types.

The report – published in July this year – found that 250 million Christians face persecution around the world, accounting for 80 per cent of all religiously motivated discrimination.

The Prime Minister, Boris Johnson, committed to implement all 22 recommendations of the report, but Bishop Philip said that progress on this was “like a curate’s egg – good in parts.” He welcomed the appointment of Rehman Chishti as Special Envoy, but said the high turnover of diplomats and lack of religious awareness among Foreign Office staff were hampering progress.

Mr Chishti – an MP until Parliament dissolved and now Conservative candidate for Gillingham – set out his personal interest and commitment to the role. He said coming to the UK from Pakistan, as the son and grandson of an Imam, he felt proud to be able to practice his faith freely in this country.

Despite the lack of reference to promoting religious freedom in the Queen’s Speech – something the Catholic Union had called for – Mr Chishti said he had received assurances from the Prime Minister this was at the heart of Government policy.

The Catholic Union will be writing to the leaders of the three main, national, parties to encourage them to include tackling religious persecution in their manifestos.

Catholic Union Head of Public Affairs James Somerville-Meikle comments: “Religious persecution should be something that concerns everyone. The ability to practice your faith freely is one of the most fundamental rights we have and underpins so many other rights and freedoms. This is why the Catholic Union wanted to make the Bishop of Truro’s report the subject for a special talk.

“We were delighted to bring together an Anglican Bishop and a British Muslim politician – Bishop Philip and Mr Chishti – to speak on this subject. They both spoke extremely well and are clearly passionate about promoting religious freedom because of their personal experience of faith. It’s encouraging to hear that progress is being made in implementing the recommendations of the report, but clearly some things will take time. There needs to be a sea change in Government policy which puts promoting religious freedom at the heart of Whitehall thinking. The Catholic Union will continue to work with other groups to get this message across.”